Kelly Fleet are delighted and proud to announce that they have been awarded Fleet of the Year 1001+ vehicles at the Fleet News Awards 2016.

Months of hard work coupled with industry leading initiatives led to Kelly's overcoming stiff opposition from much larger companies such as G4S, Costain Group and the Environment Agency to be crowned a winner for the fourth time after claiming the top spot first in 2006 and then again in 2011 and 2014. 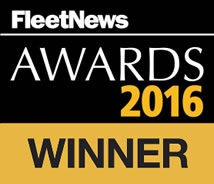